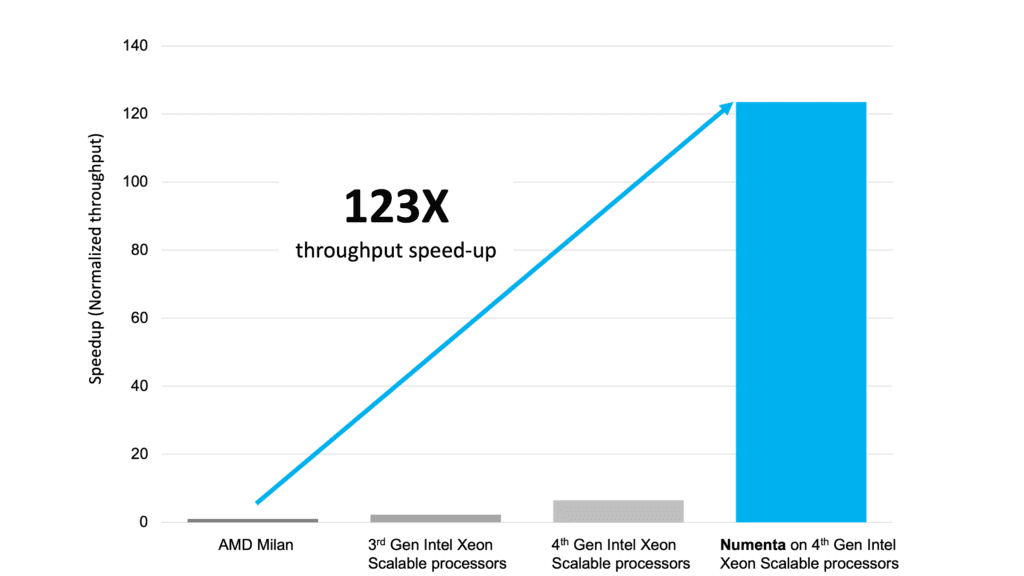 REDWOOD CITY, CA – JANUARY 10, 2023—  Applying its decades of neuroscience research to the development of deep learning technologies, Numenta Inc. is reporting groundbreaking performance achievements in AI.  In collaboration with Intel, Numenta reports it has achieved unparalleled performance gains by applying its brain-based technology to Transformer networks with Intel Xeon processors.

To allow consumers to engage in human-like interactions with computers, high throughput, low latency technologies are a requirement for Conversational AI, a rapidly growing market projected to be a $40 billion industry by 2030. Transformer networks are the deep learning model of choice for these applications.  But despite their high accuracy, the size and the complexity of Transformers have made them costly to deploy, until now.

“These breakthrough results turn Transformers from a cumbersome technology into a high-performance solution for real-time NLP applications and open up new possibilities for companies with performance sensitive AI applications,” commented Subutai Ahmad, CEO of Numenta. “Customers will be able to use the combination of Numenta and 4th Gen Intel Xeon Scalable processors to deploy real-time apps in a light-weight, cost-effective manner.”

“This type of innovation is absolutely transformative for our customers, enabling cost-efficient scaling for the first time,” added Ahmad.

To provide the benefit of its AI products and solutions to customers as quickly as possible, Numenta recently announced a Private Beta program. Numenta is actively engaging with startups and Global 100 companies to apply its platform technology to a broad spectrum of NLP and Computer Vision applications.

Customers can apply for the Beta Program at https://www.numenta.com/beta/.

Numenta has developed breakthrough advances in AI technology that enable customers to achieve from 10 to over 100X improvement in performance across broad use cases, such as natural language processing and computer vision. Founded in 2005 by computer industry pioneers Jeff Hawkins and Donna Dubinsky, Numenta has two decades of research deriving proprietary technology from neuroscience. Leveraging the fundamental insights from its neuroscience research, Numenta has defined new architectures, data structures and algorithms that deliver disruptive performance improvements. Numenta is engaged with several Global 100 companies to apply its platform technology across the full spectrum of AI, from model development to deployment – and ultimately enable whole new categories of applications.

Intel, the Intel logo, and other Intel marks are trademarks of Intel Corporation or its subsidiaries.