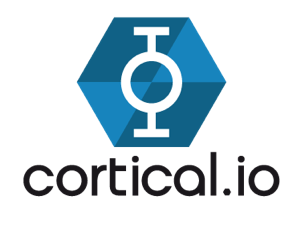 Redwood City, CA –May 14, 2015— Numenta, Inc., a leader in machine intelligence, and Cortical.io, an innovator in natural language processing (NLP), are pleased to announce a strategic partnership to
create a new computing approach to understanding text. As part of the strategic relationship, Cortical.io has taken a broad general license to Numenta’s Hierarchical Temporal Memory (HTM) technology, and Numenta has taken an ownership position in Cortical.io. The combination of Cortical.io’s Semantic Folding technology and Numenta’s HTM technology enables a host of exciting applications that have challenged computer scientists for decades, including sentiment analysis, automatic summarization, semantic search, and conversational dialogue systems.

“Cortical.io’s Semantic Folding technology is a clever and elegant way to feed natural language into our HTM technology“, said Jeff Hawkins, founder of Numenta. “Cortical.io takes advantage of the semantic encoding and predictive modeling of HTM systems in a way that will lead to significant advances in
natural language processing.”

“Natural language understanding is one of the central problems of artificial intelligence,” said Francisco Webber, founder and CEO of Cortical.io. “We aim to build the next generation of NLP, Language Intelligence, and in so doing, show the path to broadly applied machine intelligence.”

Building on their existing commercial product, the Retina API, Cortical.io will make the combined technologies available through their industrial-grade cloud service for customers ranging from innovative startups to international corporations.

Headquartered in Vienna, Austria, Cortical.io is a science-based start-up that has developed a fundamentally new approach to Natural Language Processing (NLP), Semantic Folding, inspired by the latest findings on the way the human neocortex processes information. By representing language with highly efficient semantic fingerprints, the Retina API is the first semantic engine that painlessly handles the avalanche of text data experienced by global business today –in any language and in real-time. A US subsidiary has been incorporated recently.

Numenta, Inc., was founded in 2005 to be a leader in the emerging field of machine intelligence. Numenta builds technology that helps companies automatically and intelligently act on machine generated data. Its biologically inspired machine learning technology is based on a theory of the neocortex first described in co-founder Jeff Hawkins’ book, On Intelligence. Its first commercial product, called Grok, offers a breakthrough solution for anomaly detection for IT Operations. In addition, Numenta has created NuPIC (Numenta Platform for Intelligent Computing) as an open source project (http://numenta.org). Numenta is based in Redwood City, California.