Despite the massive amount of detail neuroscientists have amassed about the neocortex, how it works is still a mystery. In this paper, we propose a novel theoretical framework for understanding what the neocortex does and how it does it.

Our proposal is based upon grid cells. The study of grid cells has been one of the most exciting areas of neuroscience over the past decade. Found in the entorhinal cortex, grid cells are used in navigation and are a powerful neural mechanism for representing the location of a body in the environment. We propose that the same mechanisms in the entorhinal cortex and hippocampus that originally evolved for learning the structure of environments are now used by the neocortex to learn the structure of objects. The mechanism involves pairing location signals with sensory input over time.

The framework suggests mechanisms for how the cortex represents object compositionality, object behaviors and even high-level concepts. It leads to the hypothesis that every part of the neocortex learns complete models of objects. Unlike traditional hierarchical ideas where objects are learned only at the top, the paper proposes that there are many models of each object distributed throughout the neocortex. We call this hypothesis the Thousand Brains Theory of Intelligence. 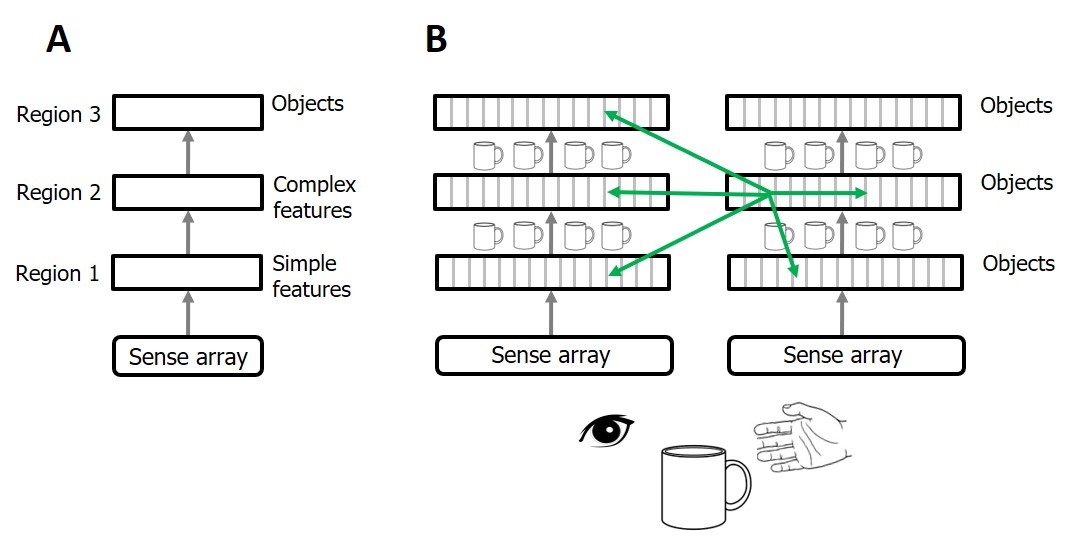 Rather than learning one model of the world, the Thousand Brains Theory of Intelligence states that every part of the neocortex learns complete models of objects and concepts. Long range connections in the neocortex allow the models to work together to create your perception of the world.

Q. What was the purpose of this study?

In two other papers, “A Theory of How Columns in the Neocortex Enable Learning the Structure of the World,” and “Locations in the Neocortex: A Theory of Sensorimotor Object Recognition Using Cortical Grid Cells,” we proposed that every cortical column generates a location signal based on grid cells, and that when sensory input comes in, the column knows where that sensory information is relative to the input. Those papers contained detailed network models. This paper walks through the key components and implications of those ideas, and shows how they lead to a complete framework for how the cortex works.

Q. What are the key takeaways?

Q. How does this research differ from other studies?

The proposal of a framework for how the cortex works is itself novel, and within the framework are many new ideas:

Q. Can I replicate these results?

There is no code or simulations associated with this paper so there is nothing to replicate. We welcome questions and discussion about the paper on the HTM Forum. The source code for “Locations in the Neocortex: A Theory of Sensorimotor Object Recognition Using Cortical Grid Cells and many of our other papers is available in our Numenta Research papers code and data repository.

Q. How does this paper make contributions in neuroscience?

Understanding the complex circuitry in the neocortex is one of the key goals of neuroscientists, and our framework may provide a useful map with guideposts, that fits within the known biological constraints. In the paper, we explain how the framework lays on top of the anatomy of the neocortex, and we propose where grid cells and displacement cells are. Experimental neuroscientists will be able to validate these hypotheses, fill in more details, and ultimately move to a far more complete understanding of how the brain is intelligent.

Q. How does this paper make contributions in machine intelligence?

Current AI systems have limitations that many leading researchers are acknowledging while calling out the need to look at the brain. Most neural nets today are based on the classic view of hierarchy. Some of these networks have very deep hierarchies with dozens of levels, require millions of examples to train, and yet often fail catastrophically with simple changes to the input.

In order to create truly intelligent systems, we need models that are far more general and can understand compositional structure, learn through movement, and learn new concepts with very few examples. We’ll need models that can apply learning in one modality, such as touch, and integrate it with another, such as vision. The Thousand Brains Theory, which is built on the common cortical algorithm, provides the framework for a single architecture that can learn anything – from objects to behaviors of objects to concepts. Our hope is that eventually these neuroscience based ideas can be translated into powerful learning systems for machine intelligence.

Q. Where can I find out more?

We have several additional resources for people who want to learn more:

Q. What is next for this research?

We are currently focused on filling in some of the pieces of the framework, like attention. We will continue to publish papers on various components of the framework with more details as well.