AI and the Brain: From On Intelligence to A Thousand Brains 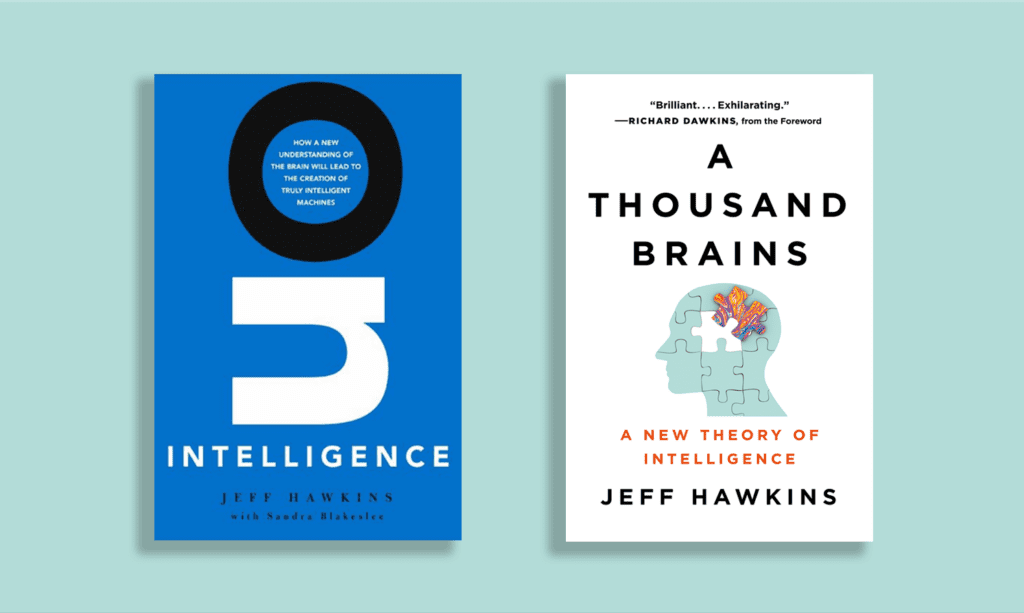 I have written two books about the brain and AI. On Intelligence (2004) has been translated into 17 languages. A Thousand Brains (2021) is being translated into more than a dozen languages, which have started to appear. The Chinese publisher, Cheers Publishing, is simultaneously releasing A Thousand Brains and a new translation of On Intelligence. They asked if I would write a preface to accompany both of these editions, which I agreed to do. They asked me to describe the relationship between the two books, if I recommend reading both, and whether the ideas proposed in the two books have been validated. I get these questions often, so I decided to publish the new preface as a blog post, which you are reading. I hope you find it useful.

How then are the two books different?

On Intelligence, the first book, proposes what a brain theory will look like. The key scientific idea presented in On Intelligence is that the brain learns a model of the world and uses this model to predict the future. We use this internal model to understand where we are, what we are doing, and to solve problems. I argued that to be intelligent, an AI system also has to learn a model of the world. Today’s deep learning AI systems do not have anything equivalent to this kind of model, and that is why they are brittle, inflexible, and can’t solve novel problems.

In the years following writing On Intelligence, we made several important discoveries that revealed the details of how the brain learns a predictive model. Our current focus at Numenta is to create the technology to build AI systems that work on these principles. I wrote A Thousand Brains to explain these new discoveries and to describe the impact they will have on AI. The key scientific ideas in A Thousand Brains are:

Do I recommend reading both books?

First, you do not need to read On Intelligence before reading A Thousand Brains. The newer book stands alone. However, there are some reasons you might want to read both. The content of On Intelligence is still relevant and sets up the problem that is solved in A Thousand Brains. The two books together show the challenges we faced and the progress we made. Those readers interested in the history of scientific endeavors might find the two books an interesting case study. Also, readers who want to more deeply understand the theory presented in A Thousand Brains might benefit from the expanded context of the earlier book.

How have the two books stood the test of time and what has been their impact?

When I wrote On Intelligence the importance of predictive models, although not unheard of, was not a mainstream idea. Many readers told me how this idea was a revelation. It changed how they thought about themselves, about intelligence, and about AI. Today, predictive models are well known among AI researchers. Although few AI systems currently work on these principles, there is a growing number of researchers who believe that predictive models will be essential in the future. For these reasons, I believe that the arguments made in On Intelligence are still relevant.

I finished writing A Thousand Brains less than two years ago, so it is a bit too early to judge its long-term impact. One of the predictions in the book was that neurons that create reference frames, called grid cells, would be found throughout the neocortex, the largest part of the brain and the part most associated with perception and intelligence. This prediction ran counter to most theories of the brain and was therefore a good test of our theories. I am happy to report that there is growing evidence to support this conjecture. Many of the other predictions in the book await experimental verification.

But what about the overall premise of both books, that AI will transition from its current technology, deep learning, to principles that mimic the brain, such as learning by moving and the use of reference frames for encoding knowledge. This hasn’t happened yet. But I remain confident that it will. Indeed, many top AI researchers have concluded that deep learning has fundamental limitations, and something will be needed to replace it.  On Intelligence makes the case that brain theory will show us how to make amazingly smart intelligent machines, and A Thousand Brains explains how to do this and the consequences both for AI and humanity.