A Conversation on A Thousand Brains and Pedagogy: Exploring Narrative Argument with Big Ideas 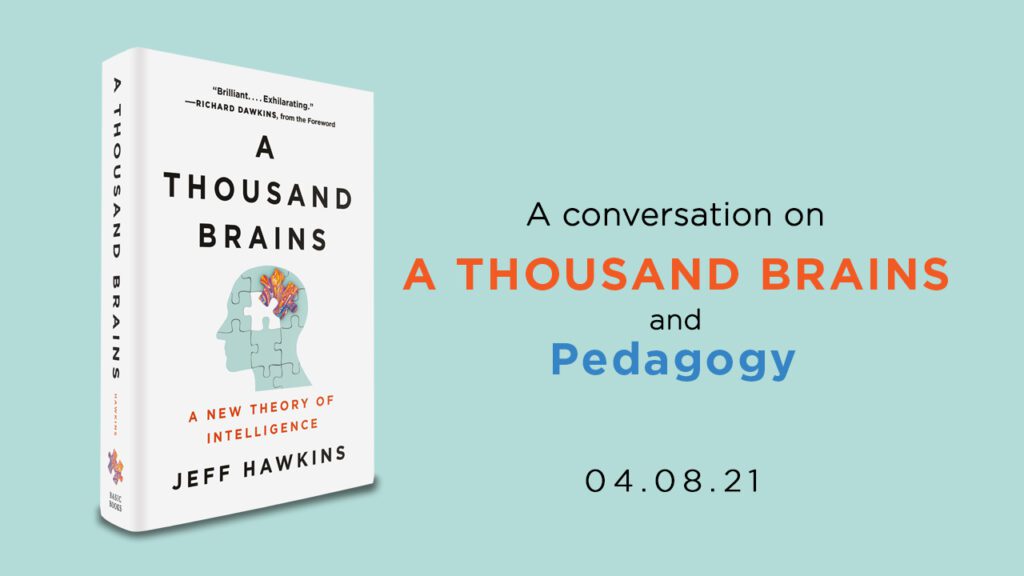 We recently started a video series of conversations with leading intellectuals on the topics outlined in A Thousand Brains by Jeff Hawkins. This series aims to extend the conversations that the book has started on the implications and applications of Jeff’s novel theory of how our brain works.

How can we apply the Thousand Brains Theory to pedagogy?

To kick off this series, we were joined by Dr. Michael Riendeau and his two students, Ranger Fair and Jacob Shalmi from Eagle Hill School. We explored how the ideas of the theory can be beneficial to educators and students, and the possible pedagogical implications of those ideas.

Dr. Riendeau is the Assistant Head of School for Academic Affairs where he’s heavily involved in educational policy, curriculum development, and teacher support. His professional and research interests include disability theory, multicultural education, and teacher preparation and induction.

We then followed up the fantastic Zoom conversation with a Q&A with Dr. Riendeau, which you can find below:

Christy: I know you and some of your students have read A Thousand Brains. As an educator, what ideas from the book and our work at Numenta strike you as most important or potentially useful for students and teachers?

Dr. Reindeau: As a teacher, I am particularly interested in ways that Numenta’s research on the neocortex can inform our understanding of learning, both in the classroom and beyond. The basic constructs that are used to conceptualize and discuss cognition have been relatively stable in cognitive psychology for some time—constructs like short-term vs. long-term memory, processing speed, and fluid reasoning, among others. It’s interesting to me to contemplate the possible alternative constructs for cognition that may eventually emerge from Numenta’s research. In A Thousand Brains, Jeff Hawkins describes the notion of reference frames that are built and refined by the neocortex as central to learning. Understanding the mechanisms for the development of reference frames strikes me as fertile ground for the development of pedagogy based on research on the neocortex.

Christy: You mention reference frames that are clearly central to Jeff’s model of the functioning of the neocortex. Can you say more about the possible pedagogical implications of that idea?

Dr. Reindeau: One of the most exciting and, at the same time, most perplexing insights in Numenta’s work is the idea that the neocortex develops and uses reference frames for making models of the world in the same way whether the objects of study are physical objects such as a coffee cup or abstract/conceptual “objects” like democracy or honor. Coupled with the notion that the neocortex operates on the basis of movement—the movement of our eyes across a scene or object, the movement of our fingers around the rim of a coffee cup, the movement of our mind’s eye through the landscape of democracy—this insight suggests wide open fields of possibility for reconsidering educational practices. In education, we have long recognized the special place of firsthand, kinesthetic experience in learning—at least in many circumstances. Mapping the connections between that actual physical movement in space and metaphoric movement through ideas and concepts is an area of future study that is very intriguing to teachers. Jonathan Mooney—who has written extensively about so-called learning disabilities—has often said, “You don’t learn to read through interpretive dance!” as his way of questioning the orthodoxy about learning styles and modalities. I have often heard students exclaim versions of “But I’m a kinesthetic learner!” by way of explaining their difficulties with reading or writing or conceptual mathematics. It may turn out, though, that we are all—in a very basic way—kinesthetic learners and understanding how that insight may lead to new classroom practices is exciting.

Another important and intriguing insight about the functioning of the neocortex is the notion of voting among the cortical columns of the neocortex. If I understand correctly, the fundamental idea is that each of many columns in the neocortex develops its own complete model of the world—or of each object. We act, then, on the consensus among those complete models as cortical columns vote. It is that consensus that rises to the level of our conscious understanding of the world and, through a process of Hebbian learning, actually creates new synapses or allows others to be pruned. This suggests possible explanations for some of the most troubling experiences of students and teachers. For example, during a classroom activity, it can appear to both a student and her teacher that she has formed a solid understanding of some new idea—say the Pythagorean relationships among the sides of a right triangle. Frustratingly, that apparently solid understanding may appear to have evaporated a day or two later, and in the most frustrating situations, that pattern can seem to repeat interminably without resolution. As we learn more about cortical voting and Hebbian learning processes, we may be better able to design instructional activities that lead more directly and more reliably to long-term learning.

Christy: Your reactions seem to be focused on the potential or future implications of Numenta’s research. Does that mean that you don’t see immediate applications of these insights in educational settings?

Dr. Reindeau: It seems to me that much of the important work that Numenta has done about the neocortex remain at least one step removed from classroom application. As lay consumers of Numenta’s research, Jeff’s book has been indispensable to us. Through careful use of metaphor, Jeff makes access to very specialized neuroscience possible for those of us who have not spent a lifetime in that field. Those metaphors, and here I mean metaphors at a very basic level—“objects,” “voting,” for example—help us understand the model of neocortical processing that Numenta has developed. The same metaphors also leave us with important questions like, “How are coffee cups and democracy (both ‘objects’ in the model) alike?” or “Do we really ‘move’ through democracy as we move our fingertips over the surface of a coffee cup?” To my mind, there may be a step between those metaphors and the very technical descriptions of the functioning of neurons and cortical columns that would help educators begin to imagine and experiment with the pedagogical consequences of Numenta’s model. To me, the gap between emerging neuroscience and classroom practice is not so much a cause for concern as a call to action: I hope that there are meaningful ways for educators and neuroscientists to collaborate as we learn more in both fields.

Christy: Toward the end of the book, Jeff offers his own call to action, suggesting that everyone should learn the basics of how their brains work. Does that seem like an opportunity for educators and students?

Dr. Reindeau: It does. As Jeff suggests, understanding our own “equipment” as human beings seems like a meaningful starting point and an important basis for understanding our experience. I think it is essential.

At the same time, many of my students have been described as having so-called “learning disabilities.” In my experience, the well-intended language that evaluators, teachers, and parents often use to explain that circumstance can position students to think about and describe themselves in unfortunate ways: as disabled, abnormal, and dysfunctional. Maybe even more importantly, that language often leads students to conceive of themselves as somehow separate from their own minds or brains. Every day, I hear students say things like, “My brain is wired differently” and “It’s not me, it’s my brain!” While those conceptions provide a distance from a difficulty that can help preserve a student’s self-image, they also present an odd kind of neo-dualism in which students feel detached from their own learning, cognitive processes, and personal responsibility. I think Jeff’s insistence on language like “I am my brain” may be helpful in this way, and I think we need to be mindful of the dangers of endorsing a view of ourselves as distinct from our brains—at least in the context of learning.

You can find more information on Eagle Hill School here.

The ‘Conversations on A Thousand Brains’ video series aims to extend the meaningful dialogues that the book, A Thousand Brains by Jeff Hawkins, has started. We invite leading intellectuals and experts in various fields to discuss the impacts and implications of Jeff’s novel framework of intelligence – the Thousand Brains Theory. Visit AThousandBrains.com for more information on the book.